To book an appointment or to access one of our services, please contact us. We offer a range of services for our patients, whilst adhering to social distancing rules. If you or anyone you have been in contact with has COVID-19 symptoms, has tested positive recently or is currently waiting for test results, please contact us to re-arrange your appointment. Click here for more information.

Here at Shires Vets we are keen advocates of pet neutering. There are many benefits to these procedures, as outlined below, but as with all operations we advise you speak to one of our vets or nurses to discuss any procedures you are considering for your pet on an individual basis. Neutering operations are performed daily at both the Stone and Eaton Park practices.

At Shires Vets we offer bitch neutering (spaying) either before the bitches first season (from 5 months of age) or three months after any subsequent season. 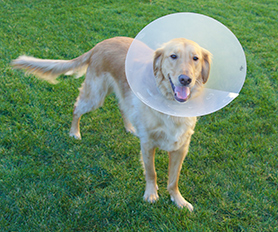 Early neutering also removes the mess and stress of having a bitch in season, and the operation is technically easier and safer for the vets to perform as the blood vessels to the sexual organs are underdeveloped, not having had a hormonal surge.

Other benefits of neutering include removing the risk of a potentially life threatening pyometra (womb infection), removing the risk of ovarian or uterine cancers as well as removing the risk of an unplanned or unwanted pregnancy as well as pseudo (or false) pregnancy. Pseudo pregnancy is not a disease, it is a natural hormonal response following the bitch's season but it can lead to some severe behavioural changes such as aggression or possessiveness over toys. Bitches can produce milk with a low risk of mastitis developing. Drug therapy can be used to reverse the hormonal imbalance in severe cases but in most the changes will have resolved within three months of the season.

We believe pet breeding should largely be left to registered pet breeders where the risks (and costs) of pregnancy, whelping and puppy rearing are fully understood. With breeders there is usually a degree of 'quality control' of dam and sire and certain negative breed related traits have been tested for such as hip dysplasia with Labrador Retrievers and syringomyelia in Cavalier King Charles Spaniels. If you are keen to breed from your bitch please do discuss this with one of the vets, it is important to be fully prepared and well read on what to expect during whelping. It is an old wives tale that it is good for the bitch to have one litter.

At Shires we are proud to be able to offer the option of a traditional spay where both the bitches ovaries and the uterus is removed or the modern technique of a minimally invasive (or "keyhole" spay) where the ovaries alone are removed with much faster recovery rates. The latter procedure does not lead to increased uterine infection or cancer rates as these diseases are secondary to the ovarian hormones, the source of which are removed. (please see separate page for further information on 'keyhole' surgery)

As with all procedures there are some risks involved with neutering which here at Shires Vets we take very seriously. General anaesthetic risks are minimised by thorough pre-anaesthetic physical examinations, the offering of a pre-anaesthetic blood test to ensure your animal is metabolically healthy prior to any surgery and the offering of peri-operative intravenous fluids ("drip") to maintain blood pressure and speed up anaesthetic recovery. Modern anaesthetic drugs are quickly eliminated from the body, being largely the same drugs as those used for human anaesthetics.

If fed the same diet before and after neutering bitches are more prone to weight gain. Usually when your pet is discharged following neutering the nurses will be able to guide you regarding dietary changes to prevent this from occurring.  Another risk with neutering is an increased incidence of urinary incontinence in later life. Certain breeds are more prone to this so don't hesitate to ask us about you individual pet, however incontinence is usually very easy to manage medically and much less sinister, and not life threatening compared to a womb infection or mammary cancer that may happen in entire bitches. Coat changes related to reduced circulating hormones can occur in certain breeds such as Spaniels and Setters - the coat often becomes longer and thinner but this is a cosmetic change only. Recent studies have indicated that certain breeds are at increased risk of cancer developing when neutered but this is not the case for the vast majority of breeds so please contact us for a discussion rather than be put off by this.

Very nervous or aggressive  dogs, both male and female may or may not benefit from neutering depending on the motivation for their behaviour so if you are concerned your pet falls into this category please discuss this with one of our behaviourists, Pam (surname) at Stone and Emma (surname) at Eaton Park.

At Shires we regularly castrate male dogs as we feel there are several health benefits following this procedure. Castration is performed under general anaesthetic and both testicles are removed, usually through a single small skin incision.

We will generally castrate dogs from 9 months of age, however the procedure can be carried out at any age so please discuss your pet with us on an individual basis.

Behavioural issues can be helped by neutering but is not a replacement for proper training. Hypersexual behaviours are often improved following castration but nervousness and aggression can be made worse (see above).

Weight gain can occur following castration if you are not careful but the nurses will be happy to discuss diet plans with you on collection of your pet.

It is especially important to castrate cryptorchid dogs (those with undescended testicles) as there is a tenfold increased risk of testicular cancer in these animals. Those where the testicle(s) is retained in the abdomen require a more involved procedure, similar to a bitch spay, where the testicle may be removed via an abdominal incision or a "keyhole" approach.

Cats, both male and female are routinely neutered (castrated and spayed respectively) from 5 months of age. These procedures are performed under a general anaesthetic and we expect your pet to recover very rapidly after these operations.

Female cats are usually spayed via a small incision in the left body wall, through which the ovaries and the uterus are removed. In certain breeds of 'colour point' cats the fur can grow back a darker shade so if you would rather a midline spay (underneath the cat's abdomen) please request this at admission. Spaying eliminates the risk of pregnancy and greatly reduces the risk of mammary (breast) cancer in later life. The relative risk for a spayed cat developing mammary cancer compared to an intact female is 0.6% if spayed before 1 year of age.

Male cats are castrated through two small skin incisions, one over each testicle. The testicles are completely removed, eliminating the chance of the cat siring kittens and reducing circulating sex hormones. This reduces (but does not eliminate) the incidence of scent marking and lessens roaming and fighting behaviours.  It is especially important to castrate your cat if one or both testicles are undescended as there is a much higher incidence of testicular cancer in these animals.

Here at Shires we can and have neutered a wide range of animals from rabbits to rats and guinea pigs to goats. For the more exotic animals please contact us for specific information on procedures and timings. 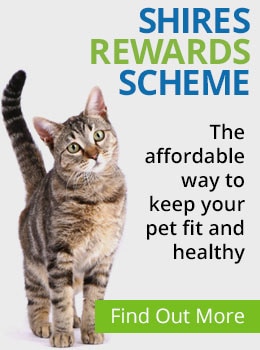